Menu
A community from npj Microgravity 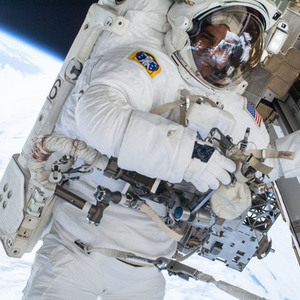 Rick Mastracchio is a NASA Astronaut, Mission Specialist, Flight Engineer and EVA Spacewalk Lead. He has flown missions on Space Shuttles Atlantis, Discovery and Endeavour to the International Space Station where he executed numerous space walks to assemble the orbiting laboratory. His most recent mission was co-piloting a Russian Soyuz spacecraft leading to six months living and working on the station. During his time on-orbit he was involved with numerous micro-G research experiments such as Ants in Space, Antibiotic Effectiveness, Burning and Suppression, Satellite Controls, Capillary flow and many more. Rick has extensive experience in the design, development, testing and operation of spacecraft guidance, navigation and control systems, propulsion systems, environmental control systems, mechanical systems, software, trajectory design and more for the Space Shuttle, Orion, Soyuz and Space Station. He has been involved with spacecraft flight test, real time flight operations and ground control operations for more than 20 years. A native of Connecticut, Rick earned a bachelor’s degree in Electrical Engineering/Computer Science from the University of Connecticut, and master’s degrees from Rensselaer Polytechnic Institute and the University of Houston. Rick is an experienced public speaker who uses his space mission experiences to develop topics for industry and uses NASA’s missions to excite and educate students of all ages. Feel free to ask Rick a question regarding his experiences designing and flying spacecraft or living and working in space.

npj Microgravity Community
We use cookies to help improve your experience. By continuing to browse our website you are consenting to our use of cookies.
Learn more