Bubble nucleation in microgravity has been studied mostly in the context of pool boiling at constant pressure. How bubbles nucleate, grow and their effect on heat transfer performance in a constant volume system, like a wickless heat pipe where boiling is to be avoided, is discussed in this work.
Joel Plawsky
Professor, Rensselaer Polytechnic Institute
Follow
Like Liked by Sorrel Bunting
0

Heat pipes are passive heat transfer devices that rely on liquid-vapor phase change to transport heat and capillary pressure gradients to transport mass. They are particularly attractive for thermal management of critical components in spacecraft since they can transport heat over large distances using no moving parts. Though used in many satellites, the Mars rovers and the Hubble, little information is available on the internal workings of heat pipes in microgravity.  Our experiment was specifically designed to look at the performance of a transparent, wickless heat pipe and to image the liquid/vapor distribution inside as it operated in microgravity.

Anyone who has boiled liquid in chemistry class flask has used boiling stones to eliminate the possibility of superheating the liquid and having it explode out of the flask.  Similar concerns of explosive nucleation exist in cryogenic fuel storage or fuel transport in space.  One place boiling should never occur is in a heat pipe where the vapor generated inside a wicking structure severely degrades the performance of the device by limiting liquid flow to the hot end.  Our heat pipe did not contain a wick but imagine our surprise when the device we thought would operate most efficiently and "quietly", exhibited explosive nucleation events instead.

What can nucleation in a wickless heat pipe tell us?

Heat pipes rely on evaporation of liquid and condensation of vapor to remove heat from the hot end and reject it at the cold end. Our system provided detailed temperature profiles and pressure measurements so we could monitor the system during nucleation events.  Being a constant volume device containing only pure liquid pentane and its vapor, we were interested in what nucleation in that kind of environment could tell us about vapor nucleation in general and how it affects the heat transfer performance of the system.  In our case, explosive nucleation events temporarily enhanced the efficiency of the device by creating large volumes of vapor and drawing more heat from away from the hot surface.

A universal correlation for nucleation events with different strengths

We analyzed 20 separate nucleation events culled from over 100 observations and categorized them into seven groups based on the maximum pressure developed during an event.  Using the temperature and pressure data we collected, we were able to obtain a single, linear correlation between the Nusselt number, a dimensionless heat transfer coefficient, and the Ohnesorge number, which is a second dimensionless number characterizing the relative strengths of viscous, inertial, and surface tension forces in the system.  The correlation can be applied to all seven groups with different extents of nucleation strength over the entire experiment.

Where do we go from here?

Our equipment was not originally designed to study boiling or nucleation, so one step would be to repeat the experiments with much faster data and video acquisition equipment so we could learn more about the onset of nucleation itself.  The absence of gravity eliminates buoyancy effects that obscure some of the fundamental physics.  A second step would be to study mixtures of liquids in microgravity.  Investigating mixtures in microgravity, may provide deeper insights into how distillation works at the microscale and how it might be developed for use in space or other planets to refine liquid fuels for spacecraft. 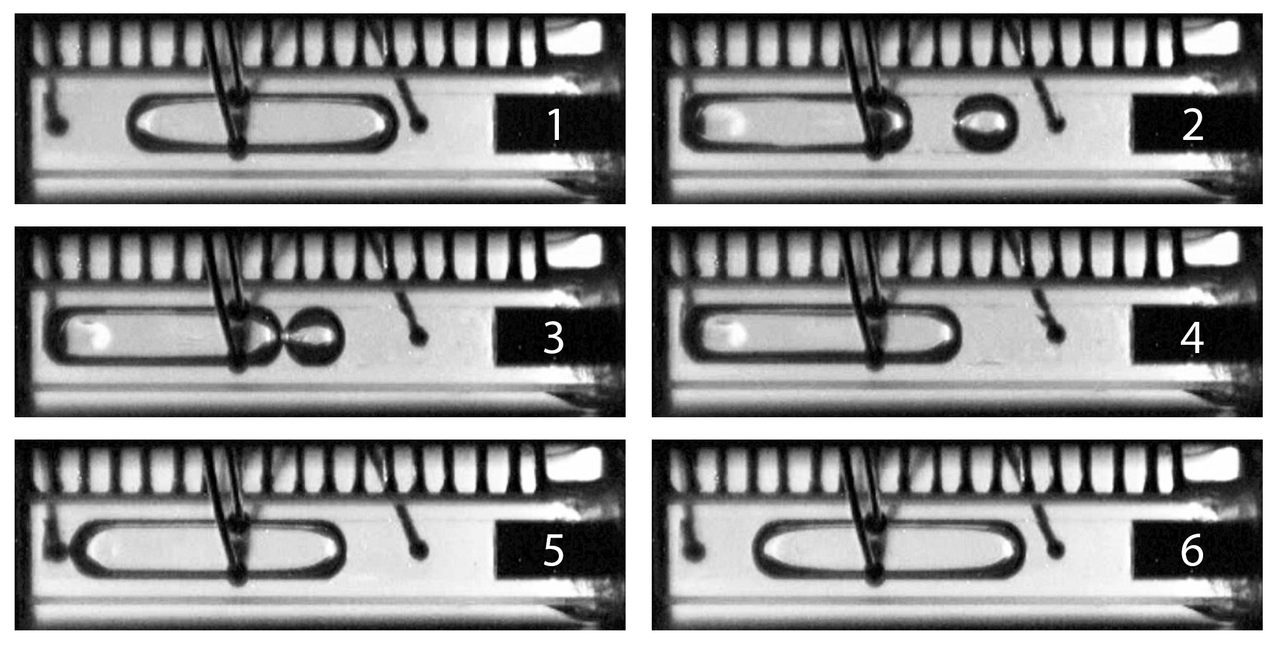 Bubble nucleation in microgravity has been studied mostly in the context of pool boiling at constant pressure. How bubbles nucleate, grow and their effect on heat transfer performance in a constant volume system, like a wickless heat pipe where boiling is to be avoided, is discussed in this work.