At North Carolina A&T State University, we have a growing number of students interested in pursuing careers in dentistry. As a microbiologist interested in microbial adaptation, I conceptualized this project with the goal of giving research experiences to undergraduates that would help them make connections between basic evolutionary microbiology and potential clinical outcomes. The background knowledge and experience in the field would then help with their undergraduate course work, in addition to enhancing their professional school applications. As a new Assistant Professor, the study of "microbes in space" has been a great recruitment tool, this combined with my expertises, has facilitated my establishment in an exciting niche in microbiology. Excitingly, the third author, Mr. Billal Khaled, an MS student at the time, in now in Dental School at UNC-Chapel Hill and the fourth author, Ms. Amina Bradley, an undergraduate at the time, is now in a PhD program at the University of Massachusetts, Medical School.

Long-term space missions have shown an increased incidence of oral disease in astronauts’ and as a result, are one of the top five conditions predicted to lead to early termination of future long-term missions. We therefore set out to evaluate the adaptive response of Streptococcus mutans (etiological agent of dental caries) to simulated microgravity to better understand why this is. The formation of dental caries is reliant on two factors, an environment that favors the growth of acid producing bacteria and the presence of sucrose in the environment for both fermentation and attachment of the organism to the tooth. This leads to formation of the plaque biofilm which is tolerant to low pHs. Other short-term studies have been conducted looking at how S. mutans may acclimate to simulated microgravity (24- to 48-hours), but ours was the first study to evaluate how it adapts, both genotypically and phenotypically to this environment long-term.

To carry out this work we performed experimental evolution over 100-days, followed by whole genome resequencing to look for adaptive mutations and phenotypic assays to evaluate how cariogenic phenotypes (adhesion, acid tolerance and antibiotic resistance) change as a result of adaptation.

What did we find?

Phenotypically, planktonic S. mutans showed no significant increase in cariogenic phenotypes. Although, we did observed significant variability between the biological replicates, indicating the likelihood of multiple trajectories existing during evolutionary adaptation. The sequencing results showed evidence of adaptive mutations in three genes. It was also clear that the genome was still in flux after 100-days of adaptation, indicating that simulated microgravity is likely a weakly selecting environment, but that, selection is indeed taking place. This also suggests that in space, microgravity may not be the main driver of evolution, and moving forward, it will be important to factor in the other environmental conditions encountered by humans and microbes in space.

Why is the work important?

This work is important as both government and private agencies are working to sustain life long-term in space. Organisms such as Streptococcus mutans have been well studied on earth and treatment strategies are more predictable, but these may not hold true during long-term space travel. Our methods are also important as we showed that comparing simulated microgravity data to both normal gravity and ancestral data, having four biological replicates in each environment, sequencing at multiple time points and reporting the frequency of mutation are important to reinforce accurate and reliable interpretations of the data obtained from such experiments.

In addition, this manuscript is the first publication for the first four authors, Mizpha Fernander, currently a PhD student, Billal Khaled an MS student currently in dental school, Paris Parsons an undergraduate at the time and Amina Bradley, also an undergraduate at the time and currently in a PhD program. All young scientists from a Historically Black College/University (HBCU) and all from traditionally minoritized groups in STEM. Thereby, this manuscript is serving a big step in helping to increase diversity and inclusion in the biological and microbial sciences.

The present study evaluated Streptococcus mutans grown planktonically, although during carcinogenesis, S. mutans must be part of the bacterial biofilm, also known as plaque, to cause dental decay. We have since developed methods to grow bacterial biofilms in simulated microgravity and plan a similar study to continue to better understand the increased susceptibility in astronauts to dental decay.

Link to the manuscript: https://rdcu.be/cOO0K 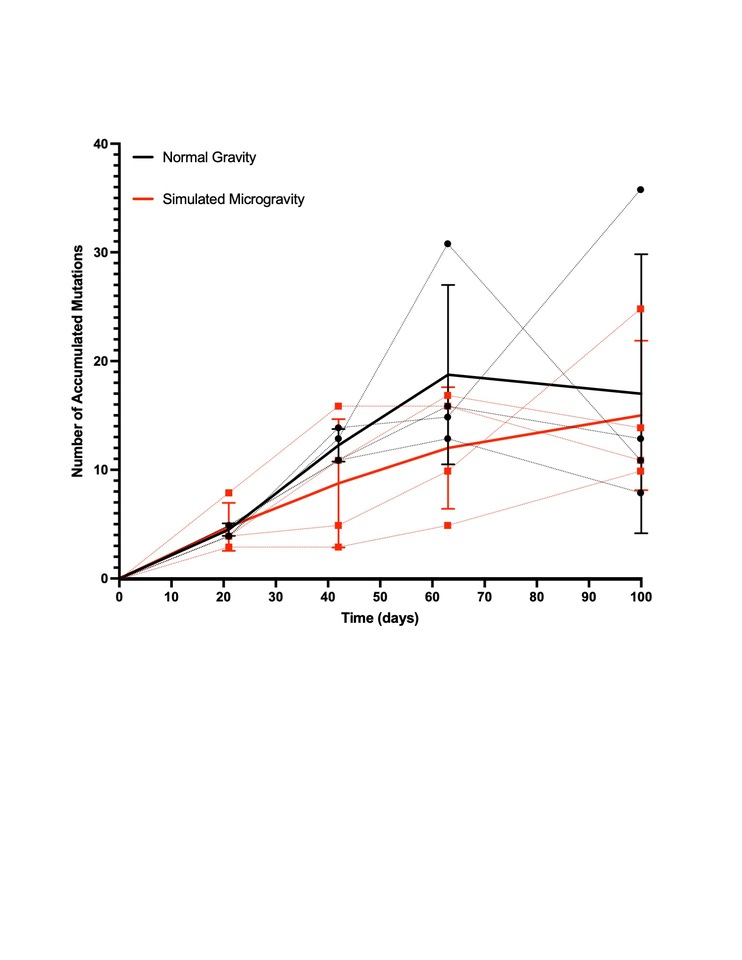