Astronaut bones and muscles are known to rapidly atrophy in a microgravity environment. Especially in recent years, attention has been focused on the effect of unloading on mitochondrial metabolism. Our previous space experiment with the nematode C. elegans has also shown reduced expression levels of genes and proteins involved in muscle and mitochondria (https://www.nature.com/articles/npjmgrav201522). Similar reports of observing changes in gene expression in a microgravity environment from cultured cells to individuals are increasing, but the relationship between gene expression and epigenetic changes is poorly understood.

We have developed a simple, sequentially synchronized culture system for the tiny nematode C. elegans (see Figure 1 of the manuscript). NASA TV has picked up our flight sample preparation for launch on 5th Space X resupply mission (2015) at the Kennedy Space Center in Florida. (https://www.nasa.gov/mission_pages/station/research/news/nematode_muscle). After the launch, ESA astronaut Samantha Cristoforetti succeeded in culturing four generations of nematodes in the Japanese experimental module of the International Space Station “Kibo”. We would like to express our sincere gratitude to the astronaut and everyone involved in the experiment. (https://www.nasa.gov/mission_pages/station/research/experiments/explorer/Investigation.html?#id=1028)

NASA’s latest study of twin astronauts on long-term missions examined epigenetic changes as well as entire changes in gene expression. However, it was not possible to conclude the presence or absence of epigenetic changes that occur specifically in the microgravity environment in space. Sample limitations are one of the main factors that make analysis difficult. Here, we studied whole-body analysis of epigenetic modifications using a model organism. In addition, a comparative analysis was performed between the wild-type and epigenetic histone deacetylase hda-4 loss of function mutants. C. elegans HDA-4 is expressed in the body wall muscles and several neurons, including motor neurons and other somatic nervous systems. It is an ortholog of mammalian HDAC4 and 5.

We have discovered that suitable epigenetic regulation by chromosomal histone modification is performed on genes that negatively regulate the body growth in the space-grown C. elegans. In the future, we expect to reveal comprehensive tissue-specific epigenome changes related to the pathophysiological effects of long-term space flight with several organisms and humans.

“EPIGENETICS” decal designed by JAXA and the experimental team. 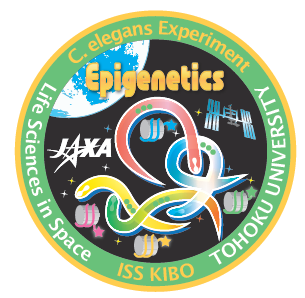 Back to Behind the Paper 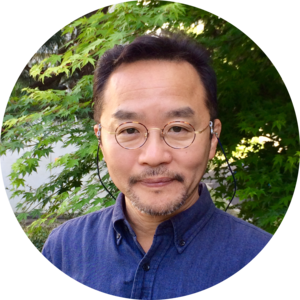