Our paper entitled “Molecular impact of launch related dynamic vibrations and static hypergravity in planarians “ just published in npj Microgravity, shows the very significant impact that a ‘rocket launch’ has on a biological system. The paper by de Sousa and colleagues is an interesting but also an alarming study where the impact of launch effects (static gravity accelerations and vibrations) are tested on planarians. It is interesting since this is a paper where both vibration and linear accelerations are tested simultaneously and alarming since the impact of these stresses are very significant to biological studies. The data has an impact for all spaceflight / microgravity related research especially when the measurements of the samples are done directly or relatively soon after the launch, since the effect of launch stresses but not microgravity would be detected. The work was a collaboration between the University of Barcelona (ES), the Pontifical Gregorian University (IT), the University of Cassino (IT), the Vrije Universiteit Amsterdam (NL) and the European Space Agency (EU).

What was the main aim of your research and why did you decide to investigate this?

When we want to study the lack of gravity, especially in orbiting systems, one needs to bring the sample into the orbital, free fall state. Basically, this means to launch it within a rocket. The main reason we want to go into a free fall nearly weightlessness environment it that we want to study the lack gravitational, i.e. mechanical stress on a system. The catch-22 situation is that the quiescent state of near weightlessness is preceded by a quite ‘violent’ process of launch. During the launch phase samples experience both linear (gravity) as well as dynamic vibrational stresses. These conditions can severely affect gene expression and cellular function, hiding the effects specifically produced thereafter by microgravity exposure.

How did you go about designing your study?

This is not the first study looking into launch effects on biological samples. Previous studies also explored the effect of vibration or the effects of linear accelerations, however, the simultaneous effects of both vibration and accelerations have never been explored.

Also, we needed to have a realistic biological system for this study. Since we are working on a future spaceflight study with planarians we already did some microgravity simulation studies using Random Positioning Machines but also static hypergravity. We also want to explore the best, most realistic way to prepare for the experiment and obviously the launch is quite a relevant part of the process.  Since planarians can regenerate the head and the tail easily in a few days, the aim was to study the effect of vibration and linear accelerations on this complex but rapid cellular process. The genes involved in the early regenerative steps are well known, so we could quantify their expression levels using common genetic techniques.

What challenges did you face?

A major challenge for this study was the combination and integration of the various technologies involved. The Large Diameter Centrifuge at the Technology Center of the European Space Agency in Noordwijk (The Netherlands) is large enough to perform such a study and can provide a good simulation for the linear accelerations. Its gondolas are sufficiently sized to accommodate a dynamic actuator to simulate launch vibrations. Finally, the knowledge and experience of the biologists regarding the planarian regeneration model provided a perfect combination for this study.

The key findings are that biological systems are very sensitive to launch effects especially when launch accelerations and vibrations are combined. The combined stresses are synergistic and effects may last for at least 4 days as we have shown in our planarians. The results also provide a handle how to deal with future experiment logistics. When are we looking into ‘pure’ effects of lack of gravity instead of the after-effects of launch stresses? This needs to be identified for each study before going into flight. It also has an impact into the interpretation of data of past studies. Were the effects found because of only the fact that cells or animals were under microgravity or might also launch effects have had an impact on the data? The effects of launch are not only relevant for orbital studies but also experiments on board parabolic aircraft or sub-orbital missions should take this effect into account.

What next? What further research is needed in this area?

What is important after this study is that, especially biological studies are screened for launch effects. This should be made part of the general ground-based qualification process, similar to what is required for the e.g. vibration tests for flight hardware.

The complete article related to this post can be found here. 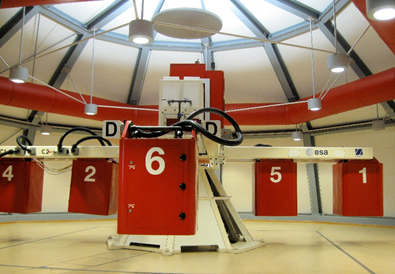