Our recent paper reports an innovative design of a magnetic levitation-based low-gravity simulator. This design offers a low-gravity volume that is more than 1000 times larger than that for a conventional solenoid magnet, which breaks new ground for future space research and applications.
Wei Guo
Associate Professor, Florida State University
Follow
Like Liked by Evelina Satkevic
0

Why do we need ground-based low-gravity simulators?

Low gravity environment is known to have a profound impact on the behaviors of biological systems, the dynamics and heat transfer of fluids, and the growth and self-organization of materials. Systematic research on the effects of gravity is crucial for advancing our knowledge and for the success of space missions. But due to the high cost and the limitations in the payload size and mass in spaceflight missions, ground-based low-gravity simulators have become indispensable. Various types of low-gravity simulator systems have been developed for preparing spaceflight experiments and for serving as stand-alone research platforms.

What are the existing low-gravity simulators and their limitations?

One major category of low-gravity simulators utilize free fall to generate near-zero gravity. These include drop towers, parabolic aircrafts, sounding rockets, and suborbital rocketry. The main advantage of these simulators is their large experimental volume where the effective gravity is close to zero. However, they also have a major limitation: the low-gravity duration is relatively short, which ranges from several seconds to a few minutes. This limitation makes them unsuitable for experiments that require long observation times. In biological and medical research, rotational facilities such as clinostat machines, rotating wall vessels, and random positioning machines are also adopted to achieve a small time-averaged gravity vector. The advantage of these simulators is their low cost and convenience in operation. However, they do not produce a genuine low-gravity environment and can generate unwanted centrifugal forces and circulating flows in the samples. Another type of low-gravity simulator is based on magnetic field-gradient levitation. Magnetic levitation of various diamagnetic materials including living organisms have been successfully demonstrated, and there is no evidence of cumulative harmful effects due to the field exposure. The major advantage of magnetic levitation-based simulator (MLS) includes low cost, easy accessibility, adjustable gravity, and practically unlimited operation time. But the biggest issue with MLSs is their highly non-uniform force field around the levitation point. If one defines a functional volume V1% as where the net force results in an acceleration less than 1% of the Earth’s gravity g, V1% is typically less than a few microlitres (μL) for conventional solenoid MLSs, which is too small for practical space research and applications. Furthermore, the high energy-consumption rate of resistive MLSs is also concerning.

Our solution of the MLS design

Considering the many advantages of MLS, we hope to come up with a new design concept of the magnet system such that the functional volume can be significantly improved. The key to increase the functional volume is to produce a uniform levitation force so it may balance the gravitational force in a large volume. Since the levitation force is proportional to the product of the magnetic field strength and the field gradient, a uniform levitation force would require a uniform field together with a uniform field gradient. These two seemingly irreconcilable conditions of the magnetic field can be satisfied approximately by superimposing a strong uniform background field with a weak field that has a nearly constant field gradient. The design concept we have proposed is to integrate a superconducting magnet for producing the needed strong uniform background field with a gradient Maxwell coil – a coil configuration that was first proposed in the 1800s by physicist James Clark Maxwell – for producing a constant field gradient. Through an optimization analysis, we have determined the optimal background field strength and the current in the Maxwell coil. Our result shows that a functional volume V1% of over 4,000 μL can be achieved in a compact coil of 8 cm in diameter. The typical current needed in the Maxwell coil is fairly large, i.e., of the order 100 kA. To handle this large current, we propose to use the high-temperature superconducting REBCO (i.e., rare-earth barium copper oxide) tapes. A practical design of the MLS with REBCO tapes is presented, which paves the way for fabricating this innovative MLS. We also showed that when the current in the proposed MLS is reduced to emulate the gravity on Mars, the functional volume can exceed 20,000 μL.

The significant of our MLS design

Our MLS design offers a functional volume about three orders of magnitude larger than that for conventional solenoid MLSs, which makes it a potential game-changer in the low-gravity simulator research field. When this MLS design is used to emulate reduced gravities in extraterrestrial environment such as on the Moon or the Mars, the resulted functional volume is large enough to accommodate even small plants or living organisms. This is of particular significance for the preparation of future space missions aiming at long-term habitation of the Moon and the Mars. The all superconducting MLS design also ensures stable operation with a minimal energy consumption rate, which is ideal for applications that require long observation times. 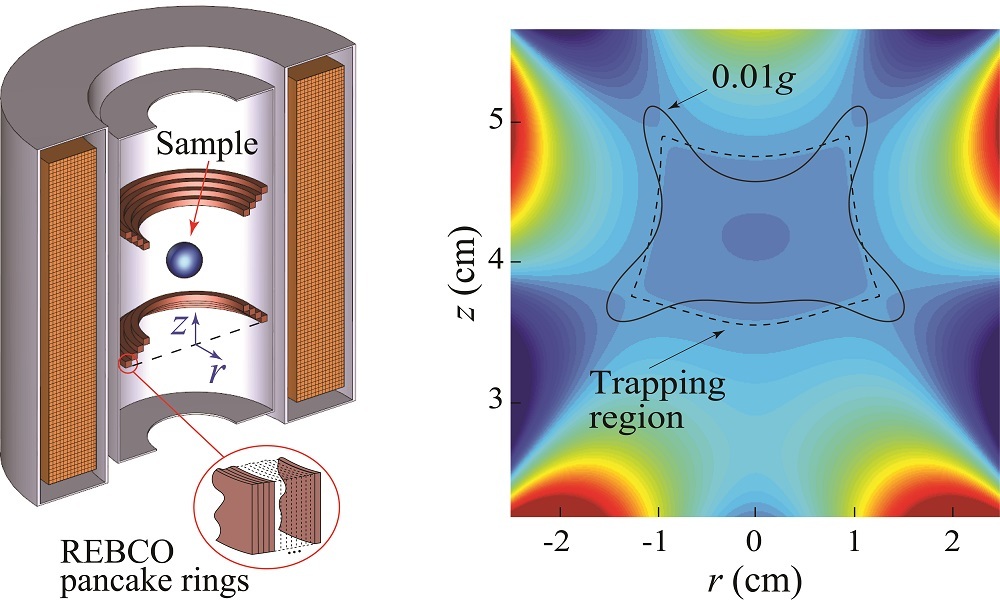 Our recent paper reports an innovative design of a magnetic levitation-based low-gravity simulator. This design offers a low-gravity volume that is more than 1000 times larger than that for a conventional solenoid magnet, which breaks new ground for future space research and applications.