Scientists will use wonky orbit to test Einstein’s theories. (Originally published online on nature.com on November 12, 2015.) 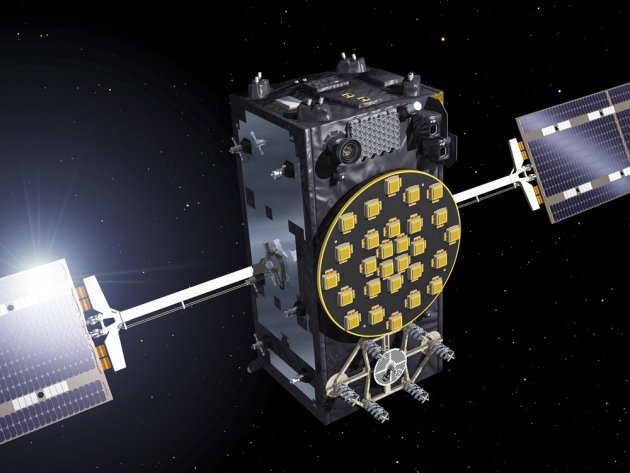 An artist's conception of one of the Galileo GPS satellites

Two satellites that were accidentally launched into the wrong orbit will be repurposed to make the most stringent test to date of a prediction made by Albert Einstein’s general theory of relativity — that clocks run more slowly the closer they are to heavy objects.

The satellites, operated by the European Space Agency (ESA), were mislaunched last year by a Russian Soyuz rocket that put them into elliptical, rather than circular, orbits. This left them unfit for their intended use as part of a European global-navigation system called Galileo.

But the two crafts still have atomic clocks on board. According to general relativity, the clocks' 'ticking' should slow down as the satellites move closer to Earth in their wonky orbits, because the heavy planet’s gravity bends the fabric of space-time. The clocks should then speed up as the crafts recede.

On 9 November, ESA announced that teams at Germany's Center of Applied Space Technology and Microgravity (ZARM) in Bremen and the department of Time–Space Reference Systems at the Paris Observatory will now track this rise and fall1. By comparing the speed of the clocks’ ticking with the crafts’ known altitudes — pinpointed within a few centimetres by monitoring stations on the ground, which bounce lasers off the satellites — the teams can test the accuracy of Einstein's theory.

Launching space experiments takes enormous time and money, so using the off-course Galileo satellites is "a brilliant idea", says Gerald Gwinner, a physicist at the University of Manitoba in Winnipeg, Canada, who is not involved in the work. "Even a mishap can be turned into something useful and fascinating," he adds. "This is a classic case of 'When life gives you lemons, make lemonade'."

In 1976, NASA launched an atomic clock aboard Gravity Probe A from Earth's surface, 10,000 kilometres into space, to compare its ticking with an identical clock on the ground. But that probe stayed in the air for just shy of two hours. The Galileo satellites, by contrast, will conduct experiments for a year, climbing and falling by 8,500 kilometres twice each day.

The test is the first time that scientists have had the chance to improve on the 1976 measurement2, says ESA. The agency's senior satnav adviser, Javier Ventura-Traveset, says that it will be the most accurate assessment ever conducted of how gravity affects the passing of time. (A 2010 experiment3 claimed a measurement 10,000 times more precise than Gravity Probe A, but the assertion is disputed4, 5).

ESA expects the results, which should arrive in around a year, to be four times more accurate than those of Gravity Probe A — enabling the agency to test whether theory agrees with reality to a precision of below 0.004%.

No one expects Einstein’s theory, published almost 100 years ago, to break down — it has passed every test thrown at it. But the results should nonetheless prove fascinating, says Gwinner. "While we don't know if and where relativity might break down, it is important to push the limits of our knowledge further and further, to eventually find hints of deviations. If this can be done as a money-saving opportunity, even better."

A future ESA experiment called the Atomic Clock Ensemble in Space, or ACES, is scheduled to fly on the International Space Station in 2017, and will push Einstein’s theory to even greater limits, with a precision that may reach 0.0002%.

In the meantime, the Galileo satellites might still find uses in navigation, adds Ventura-Traveset. Since the crafts' launch, a series of manoeuvres have gone some way to rectifying their errant orbits. This could potentially permit them to participate in the Galileo system in the future while simultaneously carrying out the relativity tests. But that has yet to be decided, he says.