Menu
A community from npj Microgravity

The New York Times says 'nerdy', we say 'awesome'! We can't wait to interview the impressive High School students who will present posters at ASGSR 2016. Always a highlight of the show for us! 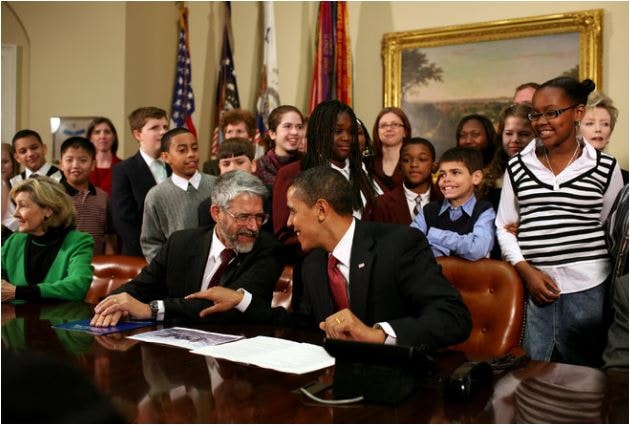 Publisher's Note: We know the feeling, Mr. President! We get excited each and every time we talk to our partners at NASA!

WASHINGTON — President Obama has started initiatives to study the brain and gene-based diseases. He has led attacks on the Ebola virus and antibiotic resistance. Last month, he wrote an academic article in a prominent medical journal.

But the science event many in the White House remember most powerfully was the kid with the marshmallow cannon.

“So would it, like, hit the wall up there?” Mr. Obama asked during the 2012 White House Science Fair when he came upon Joey Hudy, 14, standing before his homemade Extreme Marshmallow Cannon.

And so, for what may have been the first time since the British burned the house down in 1814, a fast-moving projectile hit the State Dining Room wall. The marshmallow did not stick.

Mr. Obama has changed in many ways since winning the presidency. His hair is speckled with gray. He is more skeptical of military solutions to intractable foreign problems. His teenage daughters, he has said many times, no longer think he is cool.

But another change that has received far less attention has been Mr. Obama’s embrace of science.

He began an annual tradition of science fairs, arguing that if he celebrates the nation’s top athletes at the White House, he should do the same for the best young scientific talent. He often mentions the students he has met at the fairs, including Elana Simon, who at age 12 survived a rare form of liver cancer and before graduating high school helped discover its genetic cause.

Mr. Obama’s presidential science advisory committee has been the most active in history, starting 34 studies of subjects as varied as advanced manufacturing and cybersecurity. Scientists on the committee said they worked so hard because Mr. Obama was deeply engaged in their work.

“These are sophisticated people who don’t usually get overenthused,” saidRalph J. Cicerone, the president of the National Academy of Sciences from 2005 until this June. “But it’s happened again and again.”

Dan Pfeiffer, a former senior adviser to Mr. Obama, said that he once viewed Mr. Obama’s science advisory meetings as time that could have been better spent on more urgent priorities. “But the president really looked forward to those meetings, and he really came out of them energized,” Mr. Pfeiffer said.

In a recent interview with Bloomberg Businessweek, Mr. Obama listed science as one of the few subjects he intended to pursue after the presidency.

“The conversations I have with Silicon Valley and with venture capital pull together my interests in science and organization in a way I find really satisfying,” Mr. Obama said. Of the potential breakthroughs in genomic sequencing, “That’s just an example of something I can sit and listen and talk to folks for hours about,” he said.

Mr. Obama has always loved science fiction — he was a “Star Trek” fan as a kid, and grew up reading comic books like “Spider-Man.” His favorite movie last year was “The Martian,” according to the White House.

After Leonard Nimoy, the actor who made the character Spock famous in the original “Star Trek” series, died last year, Mr. Obama released a statement: “Long before being nerdy was cool, there was Leonard Nimoy.”

Mr. Obama’s reading lists are peppered with science and science fiction titles such as Elizabeth Kolbert’s “The Sixth Extinction,” Atul Gawande’s “Being Mortal” and Liu Cixin’s “The Three-Body Problem.”

But Mr. Obama’s grasp of real science before becoming president was sketchy. He once admitted to a room full of scientists to not doing “well enough in chemistry or physics to impress you much on those topics.” And some scientists who met Mr. Obama before the presidency said they were not wowed by his grasp of their fields.

“His views at the time were just sort of developing,” said Michael Oppenheimer, a professor of geosciences and international affairs at Princeton.

But he was always enthusiastic, several top government scientists said. Within days of his election in 2008, Mr. Obama became enmeshed in selecting those who would serve on his science advisory board.

“I was really surprised by the avidity of his interest,” said Dr. Harold Varmus, who was a chairman of the board in its early days and was the director of the National Institutes of Health during the Clinton administration.

Dr. John P. Holdren, who recently became the longest-serving presidential science adviser in modern history, said that he went into his job thinking he would spend much of his time instructing Mr. Obama in the basics. But Dr. Holdren learned, he said, that Mr. Obama had read deeply in science, technology and innovation. “Very little of what I’ve done with him has been tutorial,” he said.

In addition to Mr. Obama’s essay in The Journal of the American Medical Association about ways to improve his health care law, he sat for an interview with Popular Science that focused in part on whether he considers himself a “nerd.”

Researchers on the campus of the National Institutes of Health were abuzz for months after Mr. Obama’s visit there in December 2014, when he spoke extemporaneously about a lab he had just visited using such terms as “gel electrophoresis,” “microplate” and “multiparameter flow cytometer.” The crowd gave a quiet science roar.

“I’d seen his speech, so I knew his remarks were impromptu,” said Dr. Anthony S. Fauci, the director of the National Institute of Allergy and Infectious Diseases. “Boom, he starts talking like a fundamental basic scientist, and he just blew everybody away.”

Mr. Obama has also impressed scientists by making one of his top priorities the fight against climate change, a contentious science-driven issue.

“He’s an academic, he’s one of us,” Dr. Varmus said. “He’s a rational, levelheaded guy who makes decisions based on the evidence. Now, that might actually be a deficiency as a politician.”

Publisher, Nature Partner Journals, responsible for the US & Latin America, working with world renowned partners aimed at advancing science.
Follow
npj Microgravity Community
We use cookies to help improve your experience. By continuing to browse our website you are consenting to our use of cookies.
Learn more