A community from npj Microgravity
Behind the Paper

Behind the Paper: Investigating the physical force of fluid shear and how it drives pathogen responses and infectious disease outcomes

By mimicking key aspects of the physical force environment that pathogens encounter during the infection process in the human body (like fluid shear), we unveil new insights into the mechanisms of infectious disease not possible using traditional experimental conditions.

Once inside the human body, infectious microbes like Salmonella face a fluid situation. They live in a watery world, surrounded by liquid continually flowing over and abrading their cell surfaces—a property known as fluid shear.
We explore the effects of physiological fluid shear on ST313—a particularly dangerous type of Salmonella resistant to multiple antibiotics—by using a “rotating wall vessel bioreactor” designed by NASA that simulates the low fluid shear environment encountered by cells during culture in the microgravity environment of spaceflight and also in areas of the human body, and discuss our findings in a new article published in npj Microgravity.

What was the main aim of your research and why did you try to investigate this?

Unlike “classic” Salmonella strains that cause gastroenteritis, intestinal disease is often absent during ST313 infections and isolates are most commonly recovered from blood, rather than stool. Recent epidemic outbreaks of ST313 in sub-Saharan Africa and their associated high mortality rates highlight the pressing need for better mechanistic models of infection and disease progression. Previous work from our lab had shown that physiological fluid shear forces encountered in the infected host alter the disease causing potential and gene expression of “classic” Salmonella strains in unexpected ways, but no one had looked at how this force might alter the characteristics of ST313 strains.
Our study offers vital insights into the means by which ST313 and other invasive pathogens infect the body, evade pathogenesis-related stress responses and cause illness.

Interestingly, the response of D23580 to fluid shear was different from that of “classic” Salmonella causing intestinal infections, suggesting that different fluid shear forces encountered by pathogens in the intestinal tract versus bloodstream can differentially impact disease progression.

The results of this study shed new light on the physical force cues that may be used by ST313 strains during the natural course of infection to determine their location in the body and initiate disease specific programs; this finding could reflect differences in evolutionary adaptations between Salmonella strains causing intestinal disease and those causing more severe bloodstream infections. These findings may lead to new targets for the development of urgently needed therapeutics against multidrug resistant bacteria.

Read the article in full 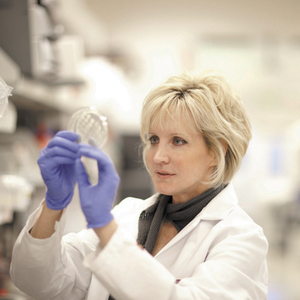 Dr. Cheryl A. Nickerson is the Editor-in-Chief of npj Microgravity and Professor in the School of Life Sciences, at the Biodesign Institute at Arizona State University in the Center for Infectious Diseases and Vaccinology. Dr. Nickerson is internationally recognized for her pioneering research in utilizing the microgravity environment of spaceflight as a unique biomedical research platform to provide novel insight into how physical forces dictate the outcome of host-pathogen interactions that lead to infectious disease. Her landmark spaceflight experiments aboard the NASA Space Shuttle and International Space Station, along with use of NASA designed ground-based microgravity analogues, laid the foundation for use of the microgravity platform for modern microbiological research in spaceflight. Her multidisciplinary research focuses on microbial and human cellular responses to the physical forces of fluid shear and/or gravity, which are relevant to those encountered during their natural lifecycles, how these responses are related to infectious disease, and ultimately conversion of this knowledge to translational applications.
Follow